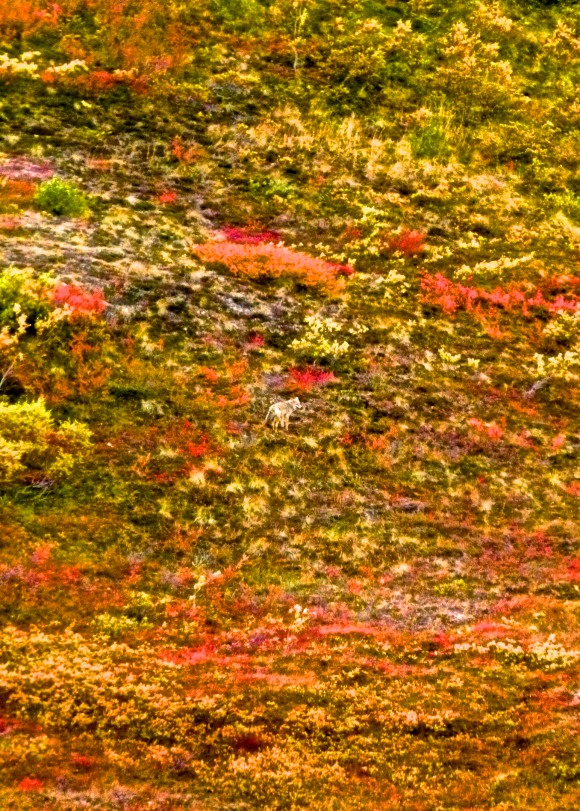 This is a picture of a real live wolf! Squint, it’s there. I swear it. If you’re on a smart phone you’re S.O.L. though.

Some people are possessed of a second sight. One specifically reserved for spotting interesting flora and fauna that the rest of us mere mortals miss. Personally, this skill set never developed beyond spotting squirrels as they taunt my dog from the front lawn, or the birds that sneer from the branches of trees as they relieve themselves on my parked car. From a moving vehicle I’d miss a cow if it wasn’t yelling moo and interrupting my podcast listening experience.

This is a long way of saying that Kate spotted it first. She pulled the car off of the park road, cut the engine and was out the door in complete silence before I could even ask what was up. I’m just enough of a naturalist to know that the best thing to do is follow the example of better naturalists. Camera dangling from my neck I got out of the Subaru and began focusing on the majestic whatever it was. My inner child tap danced in my core before the name became clear in my mind. It was a wolf.

If you asked 8 year old me what the two best movies of all time were, she’d have said Never Cry Wolf and The Journey of Natty Gann. As an adult, I’d still recommend them. So, it’s not flowery metaphor, my inner child was tap dancing. If anything it’s understatement.

My deepest wish as a child was to grow up, run away to the wilderness, and befriend a wolf. My teens and twenties were spent actively being dissuaded by everything in my suburban upbringing until finally I almost believed that this was not a realistic life choice. I worked in offices and studied psychology. I learned Quickbooks and Quicken. I balanced budgets and oversaw tax prep. And it was all sort of o.k. I met nice people and moved my passions safely into the tidy category of hobbies rather than driving life goals. On the surface I did an acceptable imitation of normal. At the same time, I worked beyond what was physically sustainable to hold down dead end, low paying, part time jobs.

So, finding myself unemployed and more than a little lost in my thirties, I was standing with my oldest friend on the side of an unpaved section of road, woven across the magenta fall tundra, no other humans within miles, watching a wild wolf get his wolf on and wondering what sort of bizarre cosmic lotto I’d won.

He capered and loped. He pounced and hunted small critters. He sunned himself and watched us, indifferent to our watching. We watched for 20 minutes of so, but really time was still. At first I took a few pictures, but my camera was simply not up to the task. It couldn’t capture the crisp air, the tip-tapping of joy, the feeling of sharing perfection that is made more perfect by its fleeting singularity. We were in his house. No single piece of technology could record it. So, dear reader I offer you the above blurry picture of his grey hindquarters as proof that sometimes the most far-flung, lost roads are the ones that lead most directly home. 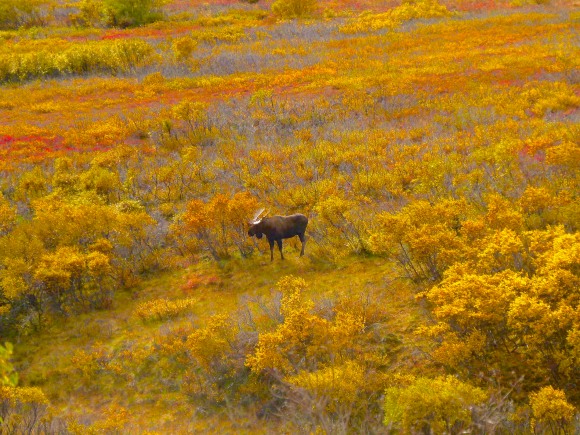 Mooses are bigger and naturally more inclined toward exhibitionism.