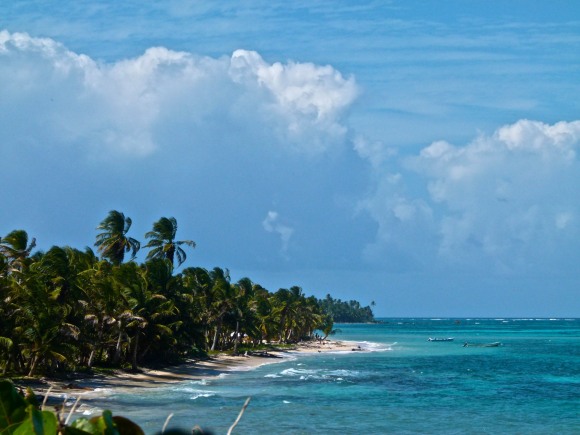 A friend since grade school, L has always walked like she is storming a castle. It’s a good day if I’m only a hundred feet behind her, it’s a good day for anyone if they are within fifty. Today, on the path through the rain forest, it’s not a good day.

Let me rephrase, it’s actually one of the most amazing days in the history of ever. We’re on the most spectacular remote island in the Caribbean. Having just spent the morning and afternoon doing not one, but two near perfect SCUBA dives, with sharks, squirellfish and color changing squid swimming up to greet us like long lost friends. Having eaten a ridiculously satisfying meal of unidentifiable fried fruits and even more unidentifiable fried fish for lunch and then, for good measure, jumping into the warm sea for a bonus swim. I’m all blissed out on endorphins, fried things and perfect weather. I’ve hit the trifecta. I could literally die of pleasant mellowness. So, clearly excellent as days go… However, I’ve left nothing in reserve for keeping up with the woman who has tired out far more hardcore outdoorsy folks than myself for the half mile or so trek back to our hut. When L wants to be somewhere, she moves like she resents the fact that science hasn’t yet perfected teleportation.

A few examples: On a vacation during her time working as a doctor in Africa, she climbed Kilimanjaro. After finishing college she lived and worked in Yosemite for a few years, teaching school kids to love nature while keeping the little bastards from walking off of any cliffs or getting drunk and mauling the bears. In med school she inaugurated what she considered a “fun, relaxing” winter vacation tradition with her park ranger buddies that one year involved a ten or many more mile (depending on who you ask) cross country ski expedition through a blizzard. Uphill. Every year she would invite me on these things and I’d make a grimacy face and say, “uh, that doesn’t sound quite A.D.A. approved enough, but you guys have fun though.” and I was good with that. Figuring that it was probably best to avoid trips with a greater than 50% chance of ending with being airlifted to safety.

I’m queen of the car campers. Generally happy puttering around base camp watching clouds drift past or melting glass bottles in the fire while friends go off and crush it. Sure, I love the outdoors, but I’ve noticed that even on gentle trails, while my friends are admiring the birds and blooms I am generally the first to spot a natural bench for picnicking, or point out small uneven patches of ground to avoid. As an outdoors person, I’m probably best described as an ecstatic slow poke. Saunter may be my verb. Along with this, I have a phobia of holding people up. No one wants to be “that girl.” The one person moving at half speed with the knowledge that if they weren’t along the group would already have arrived. At a young age, I learned how ineffective and obnoxious the phrase “hey guys, wait up” actually is no matter how many times it’s repeated. To counter this, I try my best to err on the side of caution, to pace myself and opt out of activities that would run down my energy level. In other words, if L is a type A person, I’m closer to type Q.

This trip is different. A scrupulous planner, I couldn’t give myself better than a 75% chance of even making it to this island. On this jungle trail, I’m realizing that for the first time in a long time, my energy math for the day is off the charts wrong. There needs to be a more opposite opposite word for hardcore. Aside from sounding entirely too porny, softcore doesn’t begin to explain my current state… Perhaps jellocore or Smurfcore. No, Smurves and jello are too exciting, right now I’m Barneycore.

L is just within eyesight as I trail behind. She glances over her shoulder in millisecond intervals impatiently tapping her metaphoric toes and checking her metaphoric wristwatch. I cringe inwardly, even though I know that L, 1. Most likely doesn’t care at all that I’m moving so slowly. and 2. Has no idea that she looks impatient. In the moment, I’m aware that I’m being neurotic while at the same time feeling like I need to hurry up when it’s not a realistic option. Stuck for a solution, I momentarily space out.

My eyes drift to the plants surrounding me, the sounds of unimagined creatures squawking and screeing in my ears as my left foot gently lands among the root systems of trees with no names. I’ve always had this thing with proper nouns. A block that leads to way more circumlocution than is normal. Paired with the amount of time I spend wandering around outdoors, this means that my ability to categorize or name even familiar flora and fauna is surprisingly limited to pointing wildly and shouting things like, “No, not that critter, the other one, it jumped from the branchy tree into into the pointy one. No, the other pointy one, over there! It had stripy stuff on its tail. It was awesome!” People tell me the names of things, they just refuse to stick. A naturalist I am not.

L glances back once more and I imagine stress rippling around her like someone dropped a tension pebble into her forehead. Slumping along behind, I’d slap my own face if I could, why is this just occurring to me now? I’m traveling with an outdoor educator! I stop walking and point towards the canopy, “did you see that?”

She falters, “what?” about face, and she is marching my way.

I point vaguely again towards the top of the tallest bunch of trees. “By the spiky one with the giant green dealies.”

“The coconut, or the breadfruit tree?” L has drawn even with me and begins her own pointing.

“The monster on the left I guess, with the claw leaves. That pinky cloud is just moving behind it, nearly centered.”

She leans towards me to get her eyes aligned with mine. “That’s breadfruit. Where’s the bird?”

I begin walking at my natural pace. “Sort of near the top and, ummm, to the left. It’s black and has a weird tail.”

She matches my pace eyes glued on the breadfruit tree. “Weird how? Is it long and thin, or a large fan?”

“Long and thin, with two strips sort of like the dangly leftover parts of shoelaces.”

We mosey along, L searching for the frigate, me walking at my normal pace. As soon as she sees the bird or answers a question she begins to speed up. I ask more questions and she slows down. Continuing in this way L gives me the entire natural history of the Caribbean until we reach the hut side by side, my slow poke neurosis completely dissolved.

Now in hammocks overlooking the reef side of the island L explains the importance of seagrass for recovering ecosystems as I zone out staring at the waves. This day is too much for me. There are entire worlds that we never expect to see because we have no way of knowing that they are there to begin with. The experience of today, of this trip, is so far beyond what I have ever considered a reasonable expectation for my life. Beyond a reasonable expectation for any life. Perhaps it’s the humidity or something in the damp, burning rubber smell of the place, but this moment feels like a memory even as it is occurring. This must be it. The reason that I finally agreed to an uncontrolable epic adventure with my most type A friend. My type Q personality has actually sped up to meet her partway, this day has included more activity than a normal months’ worth of adventure for me, and I feel great. For her part, L is actually lying in a hammock and enjoying it, having just walked her slowest ever half mile. With a few simple questions, we seem to have formed some midlevel type H unit. There is simply no room for neurosis in long standing friendships. Even less so in the tropics. I’ve never been happier to have misjudged my ability to keep up, and hey, now I know about frigate birds, breadfruit and more vaguely, seagrass. Remind me of this the next time I start backing out of a grand invitation.